How old are illumos man pages?

I've recently been looking at improving the state of the illumos man pages.

One thing you'll notice is that the date on some of the manpages is old - really old, some of them are dated 1990. That presumably means that they haven't been modified in any meaningful sense for a quarter of a century.

(By date here I mean the date displayed by the man command. Which isn't necessarily the date somebody last touched it, but should correspond to the last meaningful change.) 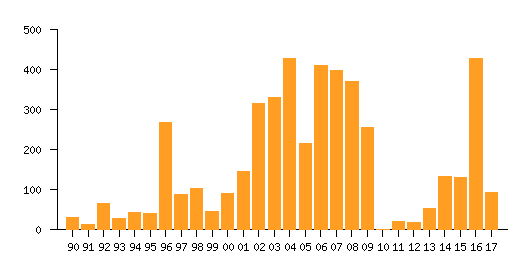 As you can see, the dates go all the way back to 1990. There's not just the odd one or two either, there are a decent number of man pages that comes from the 1990s.

There are some obvious features in the chart above.

There's a noticeable spike in 1996, which of course significantly predates illumos or OpenSolaris. It's not entirely obvious why there should be a spike, but 100 of those man pages are related to libcurses.

I suspect the dip in 2005 is a result of the launch of Solaris 10, when everyone had a bit of a breather before development kicked into full gear again.

Then there's a drop in 2010. In fact, there's just a single page for 2010. That's when the OpenSolaris project closed, so there was little work done at that point. Also, our man pages were only integrated into illumos-gate in early 2011 (prior to which they were kept separate), and it's taken a while for man page updates to pick up again.

Of course, one reason the man pages are so old is that the software they're documenting is old. That's not necessarily a bad thing, if it ain't broke don't fix it as they say, but there is a certain amount of total rubbish that we ought to clear out.
Posted by Peter Tribble at 2:17 PM 2 comments: