I've just released version 0.70 of JKstat, which brings in a couple of new features that I've had sitting off to the side for a while.

The simplest is an implementation of a RESTful server using Jersey. This is just a handful of annotated classes and an updated build script to create a war file that can be dropped into tomcat. On its own, this isn't terribly interesting - the JKstat client can use the XML-RPC interface just fine, and that's easier to implement.

However, there are a number of client interfaces that are much easier to get working if you're using RESTful interfaces. One is the java applet version of the JKstat browser; another is anything using javascript on the client.

Which leads me to the other new feature here. Spurred on by Mike Harsch's mpstat demo, I've put together a very simple browser based client for JKstat, using javascript. 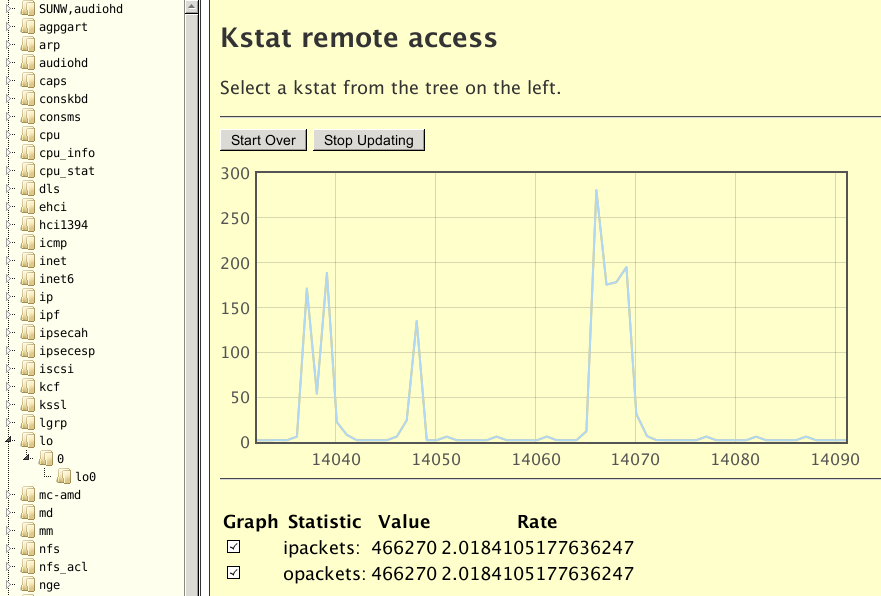 It's just a prototype, really. But it has the basic interface features you would need. On the left the kstats are arranged in a hierarchy, thanks to jsTree. In the main panel is a continuously updating table of the statistics and their values and rates, and above is a graph of the data implemented using Flot.
Posted by Peter Tribble at 2:02 PM 1 comment: