One of the things I've been working on in Tribblix is to ensure that there's a good choice of desktop options. This varies from traditional window managers (all the way back to the old awm), to modern lightweight desktop environments.

The primary desktop environment (because it's the one I use myself most of the time) is Xfce, but I've had Enlightenment available as well. Recently, I've added MATE as an additional option. 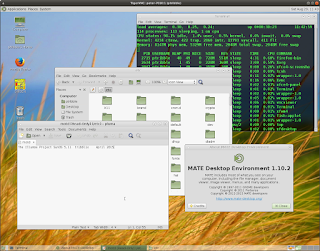 While it's not quite as retro as some of the other desktop options, MATE has a similar philosophy to Tribblix - maintaining a traditional environment in a modern context. As a continuation of GNOME 2, I find it to have a familiar look and feel, but I also find it to be much less demanding both at build and run time. In addition, it's quite happy with older hardware or with VNC.

Building MATE on Tribblix was very simple. The dependencies it has are fairly straightforward - there aren't that many, and most of them you would tend to have anyway as part of a modern system.

To give a few hints, I needed to add dconf, a modern intltool, itstool, iso-codes, libcanberra, zenity, and libxklavier. Having downloaded the source tarballs, I built packages in this order (this isn't necessarily the strict dependency order, it was simply the most convenient):
The code is pretty clean, I needed a couple of fixes but overall very little needed to be changed for illumos.

The other thing I added was the murrine gtk2 theme engine. I had been getting odd warnings from applications for a while mentioning murrine, but MATE was competent enough to give me a meaningful warning.

I've been pretty impressed with MATE, it's a worthy addition to the available desktop environments, with a good philosophy and a clean implementation.

Posted by Peter Tribble at 12:16 PM No comments:

According to the Free Software Definition, there are 4 essential freedoms:


Access to the source code and an open-source license are necessary preconditions for software freedom, but not sufficient.

And, unfortunately, we are living in an era where it is becoming ever more difficult to exercise the freedoms listed above.

Consider freedom 0. In the past, essentially all free software ran perfectly well on essentially every hardware platform and operating system. At the present time, much of what claims to be open-source software is horrendously platform-specific - sometimes by ignorance (I don't expect every developer to be able to test on all platforms), but there's a disturbing trend of deliberately excluding non-preferred platforms.

There is increasing use of new languages and runtimes, which are often very restricted in terms of platform support. If you look at some of the languages like Node.JS, Go, and Rust, you'll see that they explicitly target the common hardware architectures (x86 and ARM), deliberately and consciously excluding other platforms. Add to that the trend for self-referential bootstrapping (where you need X to build X) and you can see other platforms frozen out entirely.

Actually building software from source often enters you into a world of pain and frustration. Fighting your way through Dependency Hell, struggling with arcane and opaque build systems, becoming frustrated with the vagaries of the autotools (remember how the configure script works - it makes a bunch of random and unsubstantiated guesses about the state of your system, the ignores half the results, and often needs explicitly overriding, making a mockery of the "auto" part), only to discover that "works on my system" is almost a religion.

Current trends like Docker make this problem worse. Rather than having to pay lip-service to portability by having to deal with the vagaries of multiple distributions, authors can now restrict the target environment even more narrowly - "works in my docker image" is the new normal. (I've had some developers come out and say this explicitly.)

The conclusion: open-source software is becoming increasingly narrow and proprietary, denying users the freedoms they deserve.

I've been playing around with various zone configurations on Tribblix. This is going beyond the normal sparse-root, whole-root, partial-root, and various other installation types, into thinking about other ways you can actually use zones to run software.

One possibility is what I'm tentatively calling a Blank zone. That is, a zone that has nothing running. Or, more precisely, just has an init process but not the normal array of miscellaneous processes that get started up by SMF in a normal boot.

You might be tempted to use 'zoneadm ready' rather than 'zoneadm boot'. This doesn't work, as you can't get into the zone:

zlogin: login allowed only to running zones (test1 is 'ready').

So you do actually need to boot the zone.

Why not simply disable the SMF services you don't need? This is fine if you still want SMF and most of the services, but SMF itself is quite a beast, and the minimal set of service dependencies is both large and extremely complex. In practice, you end up running most things just to keep the SMF dependencies happy.

Now, SMF is started by init using the following line (I've trimmed the redirections) from /etc/inittab


OK, so all we have to do is delete this entry, and we just get init. Right? Wrong! It's not quite that simple. If you try this then you get a boot failure:


In practice, this isn't fatal - the zone is still running, but apart from wondering why it's behaving like this it would be nice to have the zone boot without errors.

Looking at the source for init, it soon becomes clear what's happening. The init process is now intimately aware of SMF, so essentially it knows that its only job is to get startd running, and startd will do all the work. However, it's clear from the code that it's only looking for the smf id in the first field. So my solution here is to replace startd with an infinite sleep.


(As an aside, this led to illumos bug 6019, as the manpage for sleep(1) isn't correct. Using 'sleep infinite' as the manpage suggests led to other failures.)

Then, the zone boots up, and the process tree looks like this:


To get into the zone, you just need to use zlogin. Without anything running, there aren't the normal daemons (like sshd) available for you to connect to. It's somewhat disconcerting to type 'netstat -a' and get nothing back.

For permanent services, you could run them from inittab (in the traditional way), or have an external system that creates the zones and uses zlogin to start the application. Of course, this means that you're responsible for any required system configuration and for getting any prerequisite services running.

In particular, this sort of trick works better with shared-IP zones, in which the network is configured from the global zone. With an exclusive-IP zone, all the networking would need to be set up inside the zone, and there's nothing running to do that for you.

Another thought I had was to use a replacement init. The downside to this is that the name of the init process is baked into the brand definition, so I would have to create a duplicate of each brand to run it like this. Just tweaking the inittab inside a zone is far more flexible.

It would be nice to have more flexibility. At the present time, I either have just init, or the whole of SMF. There's a whole range of potentially useful configurations between these extremes.

The other thing is to come up with a better name. Blank zone. Null zone. Something else?

Posted by Peter Tribble at 3:20 PM No comments:

The lunacy of -Werror

First, a little history for those of you young enough not to have lived through perl. In the perl man page, there's a comment in the BUGS section that says:

The -w switch is not mandatory.


(The -w switch enables warnings about grotty code.) Unfortunately, many developers misunderstood this. They wrote their perl script, and then added the -w switch as though it was a magic bullet that fixed all the errors in your code, without even bothering to think about looking at the output it generated or - heaven forbid - actually fixing the problems. The result was that, with a CGI script, your apache error log was full of output that nobody ever read.

The correct approach, of course, is to develop with the -w switch, fix all the warnings it reports as part of development, and then turn it off. (Genuine errors will still be reported anyway, and you won't have to sift through garbage to find them, or worry about your service going down because the disk filled up.)

Move on a decade or two, and I'm starting to see a disturbing number of software packages being shipped that have -Werror in the default compilation flags. This almost always results in the build failing.

If you think about this for a moment, it should be obvious that enabling -Werror by default is a really dumb idea. There are two basic reasons:

To be clear, I'm not saying - at all - that the original developer shouldn't be using -Werror and fixing all the warnings (and you might want to enable it for your CI builds to be sure you catch regressions), but distributing code with it enabled is simply being rude to your users.

(Having a build target that generates a warning report that you can send back to the developer would be useful, though.)
Posted by Peter Tribble at 3:16 PM No comments: