If you're running Solaris 10 on x86, you may have noticed that some PDF documents (particularly, and somewhat ironically, those generated by Sun) display as garbage. Instead of readable text you get rubbish - rather like this:

So now it looks like this - a vast improvement:

From iostat -xnz 1 on my desktop:

Sorry if it wraps too much.

Of course, those numbers look very suspicious. I have seen this sort of silliness several times in iostat output recently though.
Posted by Peter Tribble at 1:18 PM 1 comment:

Sunsolve is an excellent resource. I don't have any issues with the content - it's great stuff.

Where I do have problems is with it's reliability and performance. I couldn't get through at all for a while over the weekend, and often have problems with my automated patch scripts - which can time out, report 500 errors, or tell me I'm unauthorized, all at random, and have been that way for a long time.

I even got the following gem off the website just now: 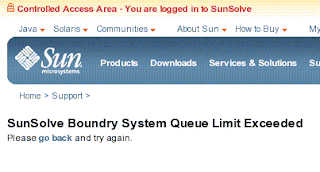 Come on Sun - show us how good your stuff really is by making your own sites work well!
Posted by Peter Tribble at 11:07 AM 7 comments:

I found this nugget on indiana-discuss to be quite apt:

one of the keys to identifying old-time Unix admins, particularly of the SunOS persuasion, is their use of tcsh

Yup. That's got my number!
Posted by Peter Tribble at 2:17 PM No comments: