I've been quite pleased with the way that KAR has worked out, so I've released a new version with some updates. The data collector is unchanged, but I've added emulation of mpstat and fsstat, added a -z flag to iostat, and fixed a number of stupid bugs.
Posted by Peter Tribble at 10:09 PM No comments:

It was my birthday recently (and boy do I feel old). It's increasingly difficult to think of decent gifts I can ask for, so I've started to ask for things to do rather than things to keep. So this year Mel bought me a flight from the Imperial War Museum at Duxford, courtesy of Classic Wings. 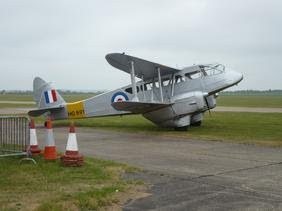 This was in a 70 year old Dragon Rapide (above). We arrived nice and early, but the weather wasn't clearing as forecast (does it ever?) so we delayed for a while for the cloud to lift and had a look round the museum.

Then we (8 of us in all) clambered in, belted up, and set off. Two immediate impressions: for one thing, the seats are very comfortable and the legroom very decent, so much better than a modern airliner in that respect; for another, the thing is loud - you can't hold a conversation, and I imagine that several hours would become quite painful. 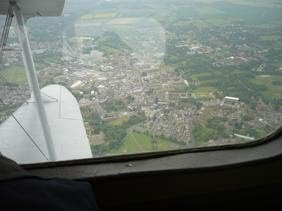 We were just below the clouds (a couple of times we drifted into the cloud briefly) but the view was spectacular. We flew north, round Cambridge (above) then up to Ely, did a circle, then down to Newmarket and back to Duxford (below). Thanks Mel! I hugely enjoyed the experience.
Posted by Peter Tribble at 10:00 PM No comments: